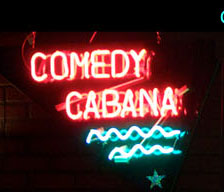 As the Grand Strand’s only 5-star comedy club, Comedy Cabana has been bringing in top national comedic talents since the mid-90’s, making it something of an elder statesman among area laugh clubs.

Over the years, the Cabana has hosted comedians such as Lewis Black, Bob Nelson, Josh Blue, Tim Wilson, and so many more comedians from Comedy Central, Showtime, HBO, and other shows and networks. And with three new comedians scheduled every week, the list just keeps growing.

Bring an appetite and a thirst for some boozy fun during your time at the Comedy Cabana. Alcoholic beverages are available for purchase for those over 21, so if you are intending to drink be sure to bring your ID. As well as drinks, guests can also purchase plenty of appetizers and other delicious wares to enjoy dinner during the show. The menu is bursting with flavor featuring wraps, hamburgers, desserts, appetizers, and more. Get your fill of spirits and drinks and quell your appetite while you laugh along with hilarious sets from renowned comics.