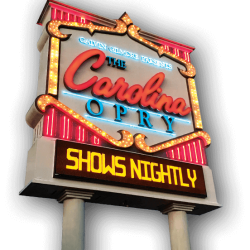 The Carolina Opry is the only show to be named a “Top Attraction in Myrtle Beach” by CNBC.

They feature a cast of over 35 of the nation’s most talented performers, this variety show spans all genres to bring you the best hits of yesterday, today and everything in between. The live music variety show features a cast of 36 of the nation’s top singers, dancers, comedians and musicians in its own 2200-seat show palace with state-of-the-art sound and lighting and three giant video screens.

The show, which is continually updated with new music and comedy, is two hours of high energy entertainment that blends humor and dancing with everything from rock ‘n roll, Broadway and country to classic hits, pop melodies and gospel. Young and old are counted among its fans who are sure to include a performance in their visit to Myrtle Beach. The Carolina Opry Theater also brings you Time Warp, the best music of the 60s, 70s, and 80s, blended with rich multimedia screens, special effects, and elaborate costuming, all performed live by the award-winning cast of The Carolina Opry.

From November to early January the theater is transformed into a winter wonderland as Calvin Gilmore presents the South’s most eagerly awaited production, The Carolina Opry Christmas Special, often referred to as “The Christmas Show of the South!”